The 2015 vintage was characterized bya winter ofaverage coldnessand aspring whose weather was mild and dry. The bud break,along with the flowering,asa consequence, was earlier than the preceding vintage. The first part of summer saw a significant rise in temperatures, which then came back into balance from the second half of August on,allowing the grapes to achieve a perfect state of ripeness. The harvesting of the grapes began on September 12th with the Merlotand terminated on October 9th with the Cabernet Sauvignon.

The grapes were selected in two different moments: first immediatelyafter picking and then after the destemming in order to insure that onlyfullyripe berries went into the fermentation tanks. As in everyvintage, the individual vineyard plots were sub-divided into aseries of smaller harvesting units on the basis of the weather of the growing season, distinguishing them according to the characteristics of the grapesand fermenting them separately. The fermentation itself took place in temperature-controlled stainless steel tanksand lasted from fifteen to twenty days. After the wine was run off its skins, it went directlyinto small oak barrels, where it went through a complete malolactic fermentation. At the end of the firstyear ofaging in the new oak barrels, the wine was blended and went back into oak forafurther six months ofaging before bottling.

A blend of Cabernet Sauvignon, Merlot, Cabernet Franc and occasionallyasmallamount of Petit Verdot to best represent the complex and elegant terroir found in Bolgheri. This wine has been produced since 1990 from vineyards on alluvial soils whose composition ranges from clay-sand to clay-loam with rocky deposits know as “scheletro”.

The 2015 Guado al Tasso is characterized byarich and complex bouquet with notes of tobacco, toasted coffee,and leather which fuse with the aromas of ripe berryfruit. The palate isavibrant one, with both tanninsand freshness well present to give savorand persistence. The finish and aftertaste are spicyand fruity, complete and fragrant. It isa vintage which averyimportantaging potential. 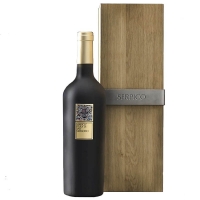